The problem with the flight began 81.7 seconds after launch when insulation broke off the external fuel tank, hitting Columbia. At the time of the incident, Columbia was traveling at speeds over 2649 kilometers per hour and was over 20,000 meters high. Due to the shuttle's altitude when the incident occurred, no one on Earth or the shuttle was aware of the severity of the damage to Columbia. The insulation struck the shuttle on the front edge of the left wing. The damage was so severe that the Thermal Protection System on Columbia's underside was no longer intact. This allowed superheated air in excess of 2800 degrees C to enter the wing during re-entry into Earth's atmosphere at a height of 129,000 meters. The superheated air circulated within the wing, melting its aluminum structure. The wing weakened causing a loss of control. Columbia began breaking apart as it passed over California on its way to a landing in Florida. The shuttle continued dropping parts as it traversed the southwestern United States. Over Texas, the orbiter began to fall out of control at 16,000 kilometers per hour, scattering debris over Texas and Louisiana. The accident was so catastrophic that none of the astronauts on board could, or did, survive the loss of the orbiter. 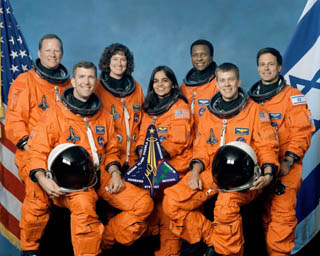